SKILLMAN, NJ (June 24) - Twenty-six elite collegiate tennis players have been named to the 2015 ITA Collegiate All-Star Team, a collection of the most accomplished student-athletes from each of the college divisions during the 2014-15 season. Oracle and the ITA will recognize these honorees, along with the ITA/Arthur Ashe Jr. National Leadership and Sportsmanship Award winners, at the Oracle/ITA Outing & Awards Luncheon held at the West Side Tennis Club in Forest Hills, NY, on Friday, August 28. USTA Eastern will participate as an event partner.

Inaugurated in 1984, the ITA All-Star Team honors the nation's top-ranked men's and women's players from the year-end Oracle/ITA Collegiate Tennis Rankings and spans the five competitive divisions: NCAA Divisions I, II and III, NAIA and Junior & Community Colleges. Also receiving honors are the winners of the 2014 USTA/ITA National Indoor Intercollegiate Championships and 2015 NCAA Division I Championships.

"The ITA would like to congratulate this fantastic group of student-athletes for their outstanding play and sportsmanship during this past season," said ITA Executive Director David A Benjamin.

ITA/Arthur Ashe Jr. National Leadership and Sportsmanship Award winners were announced at the conclusion of each division's competitive season, and the full list of winners can be viewed here.

Members of the ITA Collegiate All-Star Team each receive a personalized plaque in recognition of their tremendous accomplishments. The individuals are listed below with descriptions of their achievements.

Alvarez Llamas, a junior, won his second consecutive USTA/ITA Central Regional Singles Championship in the fall, and later advanced to the quarterfinals of the USTA/ITA National Indoor Intercollegiate Championship. In the spring, Alvarez Llamas strung together 23 consecutive dual-match singles victories while helping the Sooners carry the No. 1 overall ranking for much of the season. He finished the season as the No. 1 ranked player in the country with a 39-6 singles record.

Shane, a junior, mounted a three-set comeback win in the NCAA Singles Championship to become the second Cavalier in program history to win the NCAA singles title, joining current ATP player Somdev Devvarman (2007, 2008). Shane was also named to the NCAA All-Tournament Team after Virginia's 4-1 NCAA Championship victory over Oklahoma, the program's second national title in three seasons. He finished the season 36-8 in singles and earned the No. 2 national ranking.

Schnur, a sophomore, posted an 11-0 record in the fall, winning both the USTA/ITA Carolina Regional singles title and the USTA/ITA National Indoor Intercollegiate Championships singles title. He missed a month of playing time during the spring season due to injury but recovered to help lead the Tar Heels to the ACC Semifinals, the NCAA Quarterfinals and the No. 11 final team ranking. Schnur finished his sophomore season with a 21-9 record and the No. 16 Oracle/ITA National Singles Ranking.

Anderson, a senior, is a seven-time ITA All-American (four singles, three doubles). The No. 1 ranked player in the country posted a 27-3 singles record this year and was the singles champion of the Riviera/ITA Women's All-American Championships in the fall. She surpassed 200 combined career singles and doubles wins this season and helped UCLA return to its third NCAA Championship final in four years this May. This is Anderson's third appearance on the ITA Collegiate All-Star Team (2014, 2013).

Loeb, a sophomore who finished her freshman season as the nation's No. 1 singles player, is making her second straight appearance on the ITA Collegiate All-Star Team. Loeb helped the Tar Heels win the ITA Division I National Women's Team Indoor Championships in February and later won the program's first NCAA singles championship in May. She ended the year with a 31-5 record and the No. 3 national ranking.

Elbaba, a junior, won the USTA/ITA National Indoor Intercollegiate Singles Championship in the fall. A three-time ITA All-American, Elbaba has recorded 30+ singles wins in each of her three seasons in Charlottesville. This season, she posted a 30-7 record en route to securing the No. 5 Oracle/ITA National Singles Ranking, a personal-best finish in the final rankings. Elbaba also set a new mark for the Cavaliers when she became the first player in program history to ascend to the No. 1 national singles ranking, a ranking she held in February and March.

Lenz and Galeano finished the season as the No. 1 ranked men's doubles team in the county, and posted a 14-2 record against ranked opponents. Lenz, a junior, and Galeano, a senior, rattled off 19 consecutive victories during the spring dual-match season, an unbeaten streak that lasted nearly three full months. They finished their year with a 26-3 record and advanced to the NCAA Doubles Semifinals.

Seniors Hanfmann and Quiroz began their final seasons triumphantly, advancing to the Saint Francis Health System ITA Men's All-American doubles final in October and winning the USTA/ITA National Indoor Intercollegiate Doubles Championship in November. Hanfmann and Quiroz' fall efforts awarded them the No. 1 ranking in January, and they finished the season with a 21-9 record and the No. 4 final ranking, having never fallen lower than fifth. Quiroz is making his second appearance on the ITA Collegiate All-Star Team; he was honored as a freshman in 2012 with doubles partner Steve Johnson, who is currently the No. 52 ranked player in the ATP.

Seniors Glasspool and Hess-Olesen won Texas' first NCAA doubles title since 1944 this May. Their tournament began with an upset of USC's second-seeded Hanfmann and Quiroz in the first round, and continued on with wins over conference rivals Oklahoma State, Baylor, TCU and Texas Tech. Glasspool and Hess-Olesen won an even 50 matches together during their junior and senior seasons, and they end their careers on a seven-match win streak and with the No. 6 Oracle/ITA National Doubles Ranking.

Jansen and Routliffe are ITA All-Stars for the second year in a row. The NCAA Champions became the first women's doubles duo to repeat as NCAA Champions since 1999 and are just the third repeat winners in the 34-year history of the women's championships. Jansen and Routliffe also reached the final of the USTA/ITA Southern Regional Championship during the fall. The sophomore-junior pairing has a two-year record together of 57-8.

The nation's No. 2 doubles team, sophomores Davidson and Zhao played deep into every tournament on their schedule. In the fall, they reached the finals of the Riviera/ITA Women's All-American Championships and the semifinals of the USTA/ITA Northwest Regional Championship. During the spring, they advanced to the NCAA Doubles Quarterfinals and took home the crown at the Pac-12 Women's Tennis Doubles Championship. Davidson and Zhao held the No. 1 doubles ranking in April and finish their first season together with a 33-8 record.

Juniors Harrison and McPhillips posted a 25-7 record this season and have a career record together through three seasons of 66-15. In November, they won the doubles title at the USTA/ITA National Indoor Intercollegiate Championship and held the overall No. 1 ranking in the first edition of spring rankings in January, and later returned to No. 1 in March. Harrison and McPhillips finished the season with the No. 5 final ranking, their second straight Top 10 final ranking.

The PacWest Conference Player of the Year, Meyer grabbed ahold of the No. 1 national singles ranking in Division II in March and didn't let go. The junior led Azusa Pacific to a 20-5 record this season and individually ran a 23-2 singles record, and won eighteen straight after a 5-2 start. Meyer's last loss came in February, and he went undefeated against Division II competition on the season.

Zhang, a sophomore, led the 32-2 Seasiders to the semifinals of the NCAA Division II Team Championship and a final No. 3 national ranking this season. Zhang has finished in the Top 5 of both the national singles and doubles rankings in each of her seasons on campus, and she was ranked No. 1 nationally in singles and in doubles during the March edition of Oracle/ITA Division II National Rankings. In the fall, Zhang finished as runner up in the USTA/ITA National Small College Championships and champion of the USTA/ITA West Regional Singles and Doubles Championships.

Wood, a senior, advanced to the Division III NCAA Singles Championship for the second straight season. After losing the match as a junior, Wood prevailed in 2015 over teammate Skyler Butts and finished as the No. 1 player in the country. Wood and partner Joe Dorn also won the NCAA Doubles Championship, securing the No. 1 doubles ranking. With the CMS Stags also claiming the overall team championship, their first since 1981, Wood became the fifth Division III triple crown winner in 40 years of the championships - winning NCAA team, singles and doubles titles in the same season.

Chong, a freshman, completed an undefeated 22-0 season with a narrow 6-4, 4-6, 7-5 victory in the NCAA Division III Singles Championship, winning Wesleyan's first-ever NCAA singles title.  Chong was named both Player of the Year and Rookie of the Year in the New England Small College Athletic Conference (NESCAC), and was also named ITA Division III Rookie of the Year. She led Wesleyan's ascent from the No. 34 preseason ranking to No. 17 by season's end.

Zmak, a junior, held down the No. 1 national ranking for all four editions of the 2014-15 season, his second-straight year achieving the feat. He was the runner up in the Super Bowl at the USTA/ITA National Small College Championships after capturing the NAIA singles title. Zmak led his team to the NAIA National Championship match this year, where they finished as runners-up for the second straight season. The junior finished his year with a 30-1 singles record and was named Sun Conference Player of the Year. This is his second appearance on the ITA Collegiate All-Star Team (2014).

Podda, asophomore, ascended to the No. 1 national singles ranking in the final edition of the season, when she defeated the previous No. 1 during the NAIA National Championship semifinals. In Podda's follow-up in the championship match, she recorded a 6-1, 6-0 win over the No. 6 nationally-ranked player and also won her point in doubles. The team ultimately fell to Auburn Montgomery 5-4 and finished the season with the No. 2 team ranking. Podda finished her season with a 23-3 singles record.

Koyanagi, a freshman, completed a 23-0 undefeated season in singles and did not lose a single set all season long. In the fall, he won the USTA/ITA Southern California Regional singles and doubles titles. In the spring, Koyanagi won the Western State Conference Championships in both singles and doubles and closed out his season by winning Ventura's third ever CCCA State Singles Championship at the Ojai Tournament.

Olivares, a freshman, won the National Junior Collegiate Athletic Association (NJCAA) singles title this May, winning all her tournament matches in straight sets. She then partnered with Megane Bianco and won the doubles title, andfinished her season with the No. 1 national ranking in both singles and doubles. ASA became the first NJCAA women's team since 1991 to sweep all singles and doubles titles in the national championships. 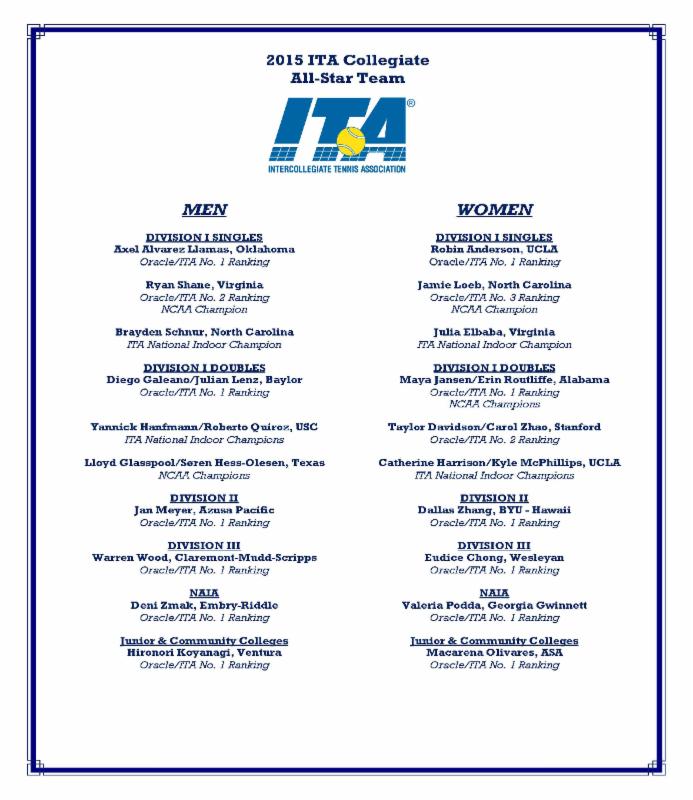 As the governing body of collegiate tennis, the ITA promotes both the athletic and academic achievements of the collegiate tennis community. The ITA, which is comprised of nearly 1,700 men's and women's varsity coaches representing over 1,200 institutions, administers numerous regional and national championships and the ITA College Tennis Rankings for over 20,000 college varsity student-athletes at the NCAA Divisions I, II and III, NAIA and Junior College levels. The ITA also has a comprehensive awards program for players and coaches to honor excellence in academics, leadership and sportsmanship. The official ITA website is www.itatennis.com.

Oracle and Java are registered trademarks of Oracle and/or its affiliates.