SKILLMAN, NJ (April 10) - The Georgia Bulldogs men's team and Michigan Wolverines women's team drew the most fans last month to earn the top spots in the March leaderboard of the 2015 ITA Attendance Race.

The Wolverines fed off their crowds to go 7-0 at the Varsity Tennis Center in front of 1,338 total fans. Michigan fans were treated to dominant performances by their Wolverines, who shutout three opponents and won 6-1 in their other four matches. The 17-3 Wolverines have hosted 2,646 fans this season are second in the overall ITA Attendance Race standings, trailing the Florida Gators (2,705 fans) by fewer than 100 spectators. 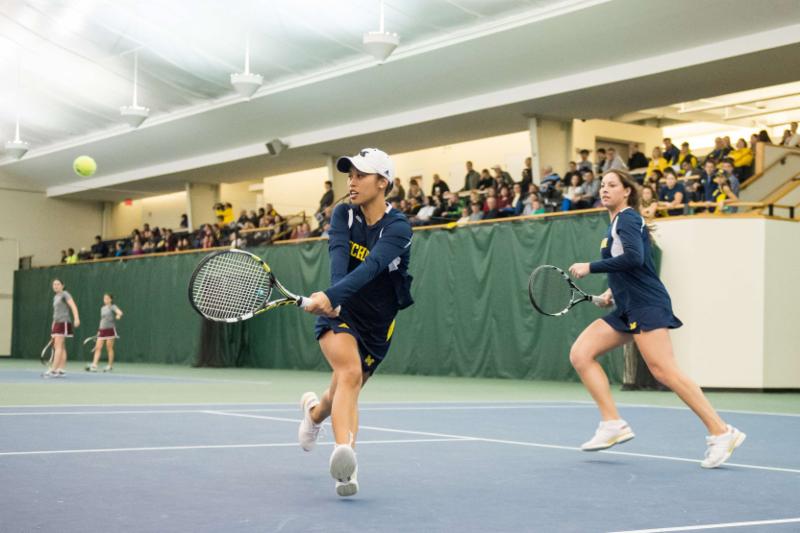 The Bulldog men were the only team to showcase over 2,000 fans in March, hitting a grand total of 2,154 at matches held at the Dan Magill Tennis Complex and Lindsey Hopkins Indoor Facility. Like Michigan, Georgia did not disappoint, winning all five matches as part of a 10-match winning streak. The Bulldogs lead the country with an average of 415 attendees per match, nearly 100 more than Tulsa who ranks second with 325 fans per match. The Golden Hurricane lead the country in overall attendance with 4,551 total spectators in 2015, with Georgia second at 4,149 fans.

Tulsa drew the biggest crowd of the month, with 700 fans coming out to the Michael D. Case Tennis Center to watch the Golden Hurricane defeat Michigan 4-1. The Georgia women welcomed in 411 fans to their March 15 win over No. 11 Vanderbilt. The Bulldogs average 322 fans per match lead all women's teams and have garnered the four of the five largest crowds in 2015 women's college tennis.

The 2015 ITA Attendance Race spans the entire regular season, so please submit your April attendance numbers by May 4 here, with monthly and overall winners to be announced later that week.

About the ITA Attendance Race

The ITA Attendance Race is a monthly program in which teams are recognized for getting fans in the stands. This exciting race offers schools a way to garner recognition and extra incentive to bolster support. We will be recognizing both monthly

and overall winners. We also collect photos and videos of crowds enjoying the tennis, and of activities used to increase your attendance.